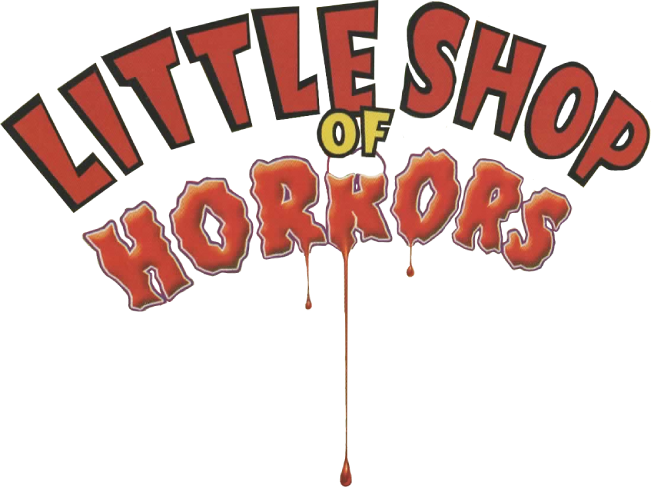 1960: The Little Shop of Horrors is released on August 5th.

1982: Little Shop of Horrors, a musical loosely based off the 1960 movie, premeires off-off-Broadway on May 6th at the WPA Theatre (later moving to the Orpheum Theatre off-Broadway)

1986: Little Shop of Horrors, a movie based on the musical, is released on December 19th.

1991: Little Shop, an animated spinoff show, is released on September 7th. It airs until November 30th of the same year.

2003: A revival of the musical debuts on Broadway at the Virginia Theatre on October 2nd. It closed on August 22nd, 2004.

2019: Another revival of the musical opens on October 17th at the Westside Theatre. 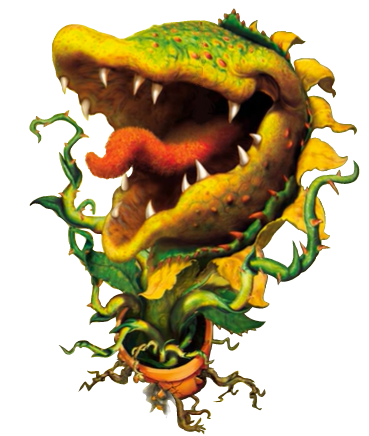 So, what is Little Shop of Horrors anyways?

Other than the original movie and a few other less well-known things (eg. Little Shop, the 1991 animated spinoff show), the plot of LSOH is pretty consistent, with a few differences between the stage musicals and the 1986 movie. Three chorus girls/street urchins, Crystal, Ronette, and Chiffon, set the scene and introduce our main character, Seymour. He's an unlucky guy who works at a flower shop on Skid Row (presumably in downtown New York). His boss, Mr. Mushnik, is sort of a father figure to him, having taken Seymour in when he was an orphaned child. His coworker, Audrey, is a pretty and kind (if naive) young woman, who Seymour is in love with. Audrey is being abused by her (currently unnamed) boyfriend, which we learn when she first enters the shop and Mr. Mushnik points out that she has a black eye, and urges her to break up with him. Enter Seymour who trips and breaks a bunch of flower pots. The three of them sit around the otherwise empty flower shop for a while, until it's 6 PM (closing time). Mr. Mushink is fed up with having no customers and says he's closing the shop, until Seymour brings up a plant he brought a few days before, who he's affectionately named Audrey II. He says that with the plant being weird, putting it in the window may attract more customers. Mr. Mushnik thinks his idea is ridiculous, but a customer comes in at that very moment and buys 100$ worth of roses. They continue to get customers throughout the day and when they finally close up shop, Mr. Mushnik says he's taking them all out for dinner. Audrey says she has a date with her boyfriend and leaves. Audrey II wilts and Mr. Mushnik scolds Seymour, telling him to fix it because it's doing a lot for business. He leaves and Seymour sings his woes to the plant. He accidentally cuts his hand on a rose's thorns, and the plant opens up, revealing to us that it eats blood.

Cut to later (about a few days/weeks), Seymour is doing a radio interview and Audrey II has grown significantly bigger. Mr. Mushnik is listening from the flower shop, and when Seymour comes back after the interview Mr. Mushnik scolds him for not giving the address of the shop. Nevertheless, they're excited about the success, and the chorus girls congratulate him. They hang around after Seymour and Mr. Mushnik go home, and Audrey comes into the shop with a newly broken arm, asking if she's late. Obviously, she is, and the chorus girls ask her why she's even with her boyfriend in the first place. She tells them that it's because he'd get angry if she left, and if he treats her like this when he likes her, she wouldn't wanna see what he'd do if he got mad at her. The chorus girls tell her to just dump him and start dating Seymour. She laments her situation and tells them about her dream to be a housewife in the suburbs.

It's the next day, and the shop is closed for renovation. A man comes around and asks the chorus girls where the shop is, and they tell him (in exchange for a dollar). Right after, they follow up by telling him that the shop is closed for the day, and they laugh. The man says he doesn't want to visit the shop, but he's here to pick up his date. They grill him for a bit and we figure out that this guy is Audrey's shitass boyfriend. They start yelling at him to go away but he tells the girls to relax and explains that he is the way he is because of his job- he's a dentist! He leaves to go pick up Audrey, but Seymour is still at the shop, and the dentist, Orin Scrivello, sees the now giant Audrey II and tells him that he should go to a flower shop uptown instead of staying in Skid Row. Seymour says he'll think about it, and Mr. Mushnik, who's right outside, panics and offers to adopt him. Ultimately, Seymour accepts, and Mr. Mushnik leaves the shop. Seymour sings to Audrey II, the source of his good luck, about how happy he is. However, when he's about to leave, the plant wilts. Seymour, frustrated, tells the plant to wait a few more days before eating again. He's been feeding the plant blood from his fingers the past few weeks and he's very anemic. The plant tells him to feed it, which surprises him. It sings to him about all the awesome things that'll come to him if he feeds it, until it asks him to feed it a whole human being, which sets him off and he refuses, telling Audrey II that there's nobody who deserves to be chopped up and fed to a hungry plant. Just then, Orin and Audrey reenter the shop because Audrey forgot her sweater. Orin is yelling at her, and on the way out he hits her. Obviously this upsets Seymour and he and the plant agree that the next day, he'll kill Orin and feed him to it.

We're now in the waiting room of the dentist's office, and Seymour is called in. While Orin is preparing his gas mask, Seymour pulls out a gun, planning to shoot him. He can't bring himself to do it, but when Orin is about to take off his gas mask, it gets stuck. He begs Seymour for help, but since his original plan was to kill him, Seymour decides not to help Orin and lets him literally laugh himself to death. Seymour, already regretting his decision, is seen feeding Orin's mangled remains to Audrey II.

That's where Act I ends in the stage versions, and we go on to Act II, which takes place a few days/weeks after the ending of Act I.

It's a busy day at the shop, and Seymour and Audrey are swamped with orders and calls. At the end of the day, Audrey is exhausted and wants to go home, but Seymour insits she stays for a few more minutes, because he brought a new jacket and wants to show her. He comes out of the back wearing a black leather jacket, akin to the one that Orin always wore. Audrey gets upset and runs outside of the shop. Seymour follows her and he asks her if she's upset about Orin's "mysterious dissapearance". She says that she's never felt more relieved but she feels like it's her fault because she wanted it to happen. Seymour comforts her and they confess their feelings for eachother, but Mr. Mushink finds Seymour and starts saying cryptic shit to him. He's confused and asks Audrey to leave, and says he'll see her later. He asks Mr. Mushnik what he's talking about, and he accuses Seymour of killing Orin, which he's obviously correct about. Seymour panics and tricks Mr. Mushnik into climbing into Audrey II's mouth, leading to his demise.

Seymour is now stressed and miserable, now being the head of the shop, being swamped with work, and having lost his father to his own hand. He's getting a lot of buisness offers, but it's too much for him, and he plans to kill Audrey II, until he comes to the (incorrect) conclusion that if he wasn't famous, Audrey wouldn't love him anymore. He decides to keep the plant alive. One rainy night, while Seymour is working (and yelling at the plant for being picky and only eating human flesh instead of other animals), Audrey comes into the shop to check on him. They talk for a bit, and he asks her if she'd still love him if he wasn't famous and Audrey II never existed. She says that she'd still love him, and he vocalizes his plan to kill Audrey II to her. Obviously, Audrey doesn't understand, and Seymour tells her that he'd explain it to her tomorrow. They hug and she leaves. Later in the night, after Seymour has left the shop, Audrey can't sleep because she's thinking about what Seymour said earlier, and she goes back to talk to him and ask him what's wrong. He's not in the shop because right before she arrived he'd gone to the deli to get Audrey II something nonhuman to eat. Of course, Audrey runs into the plant, who starts talking to her and asks her for water. She's understandably shocked, but goes to get water for it anyways. When she comes back, Audrey II starts trying to eat her. Seymour reenters the shop, and takes Audrey out of the plant's mouth, but she's already fatally wounded and dies in Seymour's arms. After feeding her body to the plant, he sits miserably on the curb, his life ruined. A man named Patrick Martin comes to talk to him, and tells him about an offer he has for Seymour- take clippings from the plant, develop little Audrey IIs, and sell them across the country. He tells him that they could someday be "bigger than Hula-Hoops!". Seymour runs back into the shop to confront Audrey II and ask it if this was it's plan all along, which it confirms. Seymour is furious and starts fighting with the plant, trying to kill it with rat poison, a gun, etc. The last thing he tries is going into the plant's mouth with a machete, planning to chop it up from the inside, but he ultimately ends up getting eaten. Patrick Martin goes into the shop with the chorus girls looking for Seymour, who he doesn't find, but he tells the girls to start taking cuttings from Audrey II. He leaves the shop and the girls sing a song about the aftermath- Audrey IIs have started wreaking havoc, eating humankind, and taking over the world in general.

If you're confused about the ending, that makes sense. If you've only seen the theatrical release of the 1986 movie, you would've seen the ending where Audrey doesn't die and Seymour sucessfully kills Audrey II, and Seymour and Audrey get married and move to the suburbs, just like Audrey had always wanted, but we see that in their garden, a little Audrey II is growing and it smiles at the audience just before the movie ends. Many complain that this ending doesn't make sense, and I see why they would think that, but I think it's cute, and after all Audrey has been through, I think she deserves a happy ending. I don't have a preference between the two, though. I like them equally. However, the movie was originally going to be released with the typical bad ending that LSOH has, but test audiences hated it so they changed it to the good ending, which is the offically released version, but the original ending/director's cut was published in 2012.

What LSOH means to me